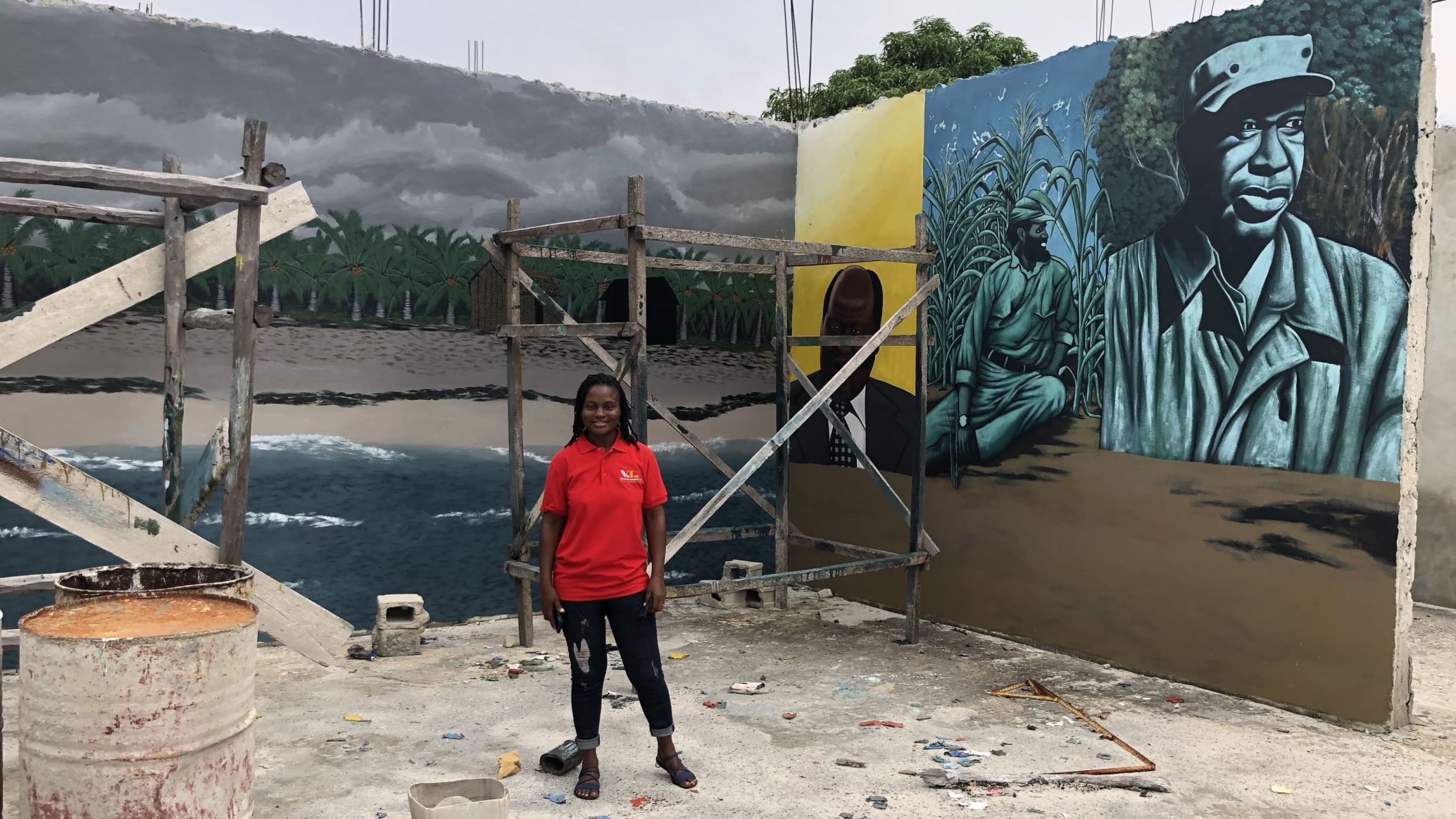 Hard to believe, but today was already my last day in Vilankulo. Before Joaquim and I would drive back to Maputo in the late morning, I was looking forward to visiting the museum and gallery of Izelia and Carlos.

My first ride in an autorickshaw
Already the evening before, I made an appointment with Izelia for this morning at 7:00 a.m. to visit the museum and the gallery together with her. Since she had already told me a lot about it, I was very excited and looking forward to the meeting.
At 6:00 I was picked up at the hotel by an autorickshaw, also called tuk tuk, and driven to the museum. Although there are also “real” cabs in Vilankulo, autorickshaws are a cheaper alternative here.
I was very happy that the driver was at the hotel at the agreed time to pick me up. Because in Mozambique, the clocks often run differently and people don’t always stick to the agreed times 😉.
My first ride in the three-wheeled autorickshaw was very shaky, noisy, and I felt very unsafe at first because there is no way to buckle up. In addition, autorickshaws can reach speeds of up to 50 km/h and my driver didn’t necessarily drive slowly. However, after a few minutes I got used to the shaky ride and it was really fun.

The real Vilankulo
On the way to the museum I got an insight into the real life of the people, who live in very simple conditions, far away from the touristic events. The houses are mainly built of bamboo, the roofs are made of tin and the properties are rarely fenced or have doors. Now and then modern buildings can be seen, but luxury is not found here. Although the people do not own much, I had the impression that they are nevertheless very happy and content. I noticed this, for example, in how relaxed and friendly all the people were that I met on the way.
What impressed me personally was how clean and tidy all the streets we passed were. This place exuded safety to me and the people were very welcoming. It is not for nothing that Vilankulo is called “the city of good people”.
As we drove past a woman selling homegrown mangoes and vegetables, I asked the driver to stop for a moment. Already in Maputo I searched in vain for Mozambican mangos, because the mango season was already over and the trees had hardly any fruit left. Therefore, this was a real moment of happiness for me.
When the paved road ended and we reached the sandy paths, the landscape overwhelmed me! The vegetation shone in rich green, trees, plants and big coconut palms were everywhere and also the bright blue ocean was very close.
How lucky people are to live in such a paradisiacal place.
Vilankulo and its people have left an impression on me and will definitely stay in my memory. I am already looking forward to the next visit to the “city of good people”.

Young locals are committed to the development of their region
I met Izelia at the agreed meeting point and together we continued the journey to the museum. The museum, where Izelia, Carlos and another volunteer work, is financed by the city of Vilankulo. It is located very close to a beach and even has direct access to it.

Visit to the museum and gallery
When we arrived, I was very surprised, as I had imagined the museum to be completely different. In this one, the museum building was much bigger and the property was smaller – but it was the other way around. The museum consists of a reception area, two small rooms and a hallway. Pictures depicting the history and traditional rituals of the region hung on the walls. Izelia guided me through the gallery and I was impressed with how knowledgeable Izelia was about the history, traditions and rituals of the area.
To my great amazement, this was the first time I saw such huge and ancient elephant trees on this property. One of them is already over 1,000 years old – really impressive! What I also didn’t know is that people used to cut holes in the trees to catch rainwater in them.
After the 40-minute tour of the museum and grounds, we made our way to the gallery. For this, we traveled another 15 minutes by auto rickshaw. The gallery is located right next to the property where Izelia and Carlos built a house together.
In addition to the gallery and the illustrated book, they support other social projects. For example, they run the local archaeological museum on a voluntary basis and accompany young people during their training in the hotel industry to make it easier for them to start their careers.

Return journey to Maputo
Today Joaquim and I still had to make the return trip to Maputo. By car we will be on the road for about 11 hours, which is why I was already back at the hotel around 11:00. I really wanted to avoid arriving too late, because my family lives in the province of Maputo outside the city, and it is dangerous to be on the road in the dark.

My review and conclusion
My personal conclusion about the country and the projects I visited during my trip is very positive. The country is changing, the young population is very engaged and innovative. Especially in the capital, economic growth is visible everywhere. During the road trip, I noticed that the development in the country is not simultaneous. I became more aware of the gap between rich and poor with every kilometer we traveled from Maputo towards Vilankulo.
In the small districts, outside the capital, people live in modest conditions. The modern infrastructure is not yet sufficiently developed, there is a lack of transportation and children often have to walk several kilometers to school.
As a Mozambican, I would of course like to see economic development speed up and benefit the entire civilian population in the country. I would like to see better access to elementary school, secondary schools and vocational training centers for all. With the help of development cooperation and the many international organizations I have seen on the ground, much has already improved in this regard.
In 2017, 85% of children nationwide were already able to get a place in elementary school. By comparison, in 2000, the year I moved with my family from Mozambique to Germany, only 55% of children received a place in elementary school (Improving primary and vocational education in Mozambique | BMZ) .
Economically, Mozambique has a high growth potential. Not only tourism plays a major role in the development of the country, but also agriculture (Source: Agriculture in Mozambique (Agriculture in Mozambique) in Mozambique) – giz.wiki).
With our project to support farmers in Vilankulo, I have been able to witness how positively the project has already impacted the lives of the farmers and the region within a short period of time. The cooperation with the farmers and the municipality has been so successful that other similar projects have been created to promote agriculture. We are very proud of this.
I am looking forward to the next project trip, maybe next time it will be to Tanzania 😊!