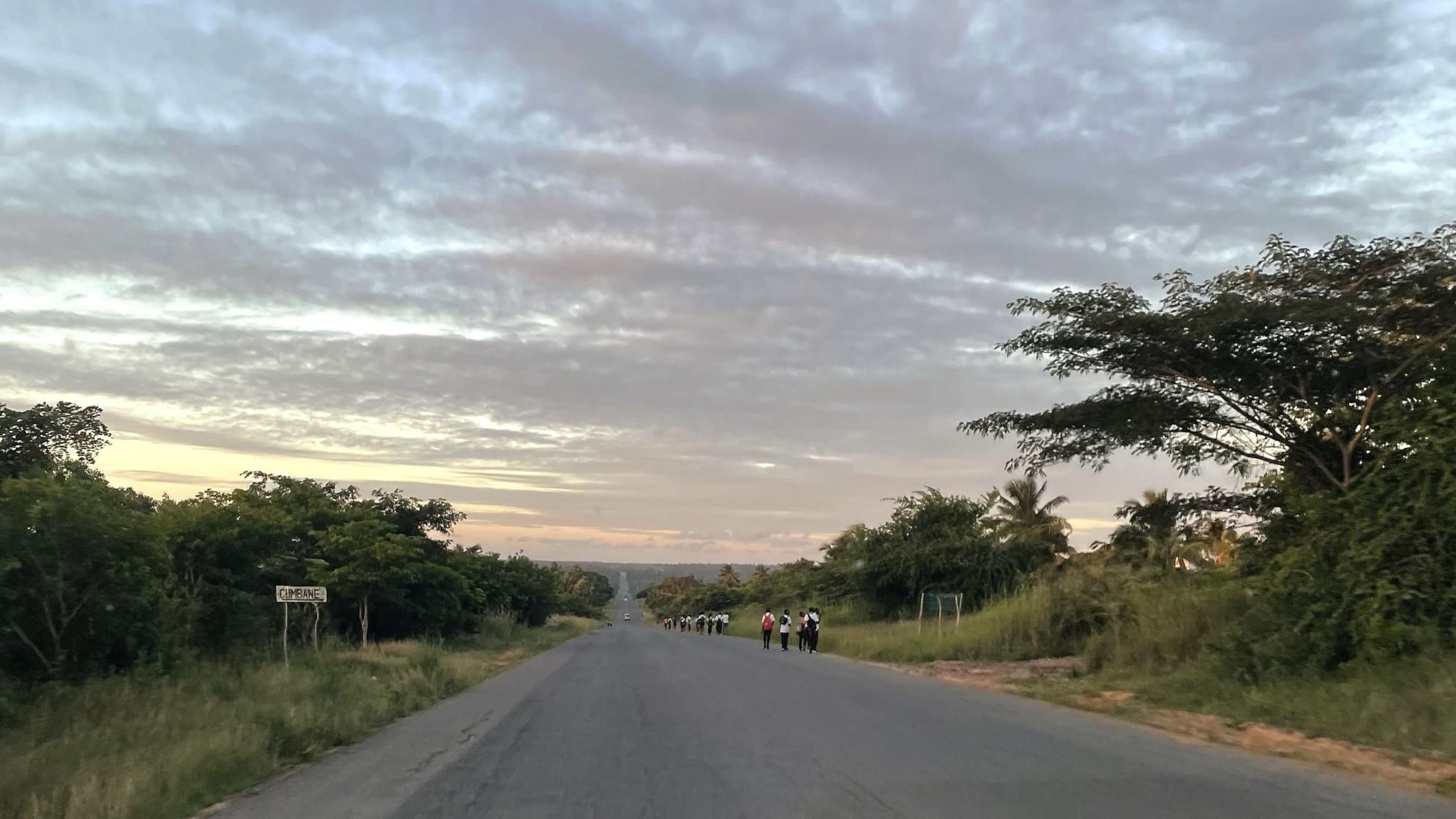 In the second part of my travelogue, I am telling you about the impressions I gained on the journey from Maputo to Vilankulo and what it taught me about the real Mozambique.

Through Mozambique by Car

After spending a few days with my family in Maputo province (not the capital), I went with Joaquim by car from Maputo to Vilankulo. Joaquim is a long-time employee of the German-Mozambican Society (Deutsch-Mosambikanische Gesellschaft, DMG in short) and has been a cooperation partner of the FHF in Mozambique for many years. The DMG has been building pre-schools, primary schools and vocational centres in Mozambique for over 25 years.
In 2019, I travelled to Vilankulo for the first time, but at that time by plane. Even though I was aware that we would be travelling for more than 10 hours by car, I was very much looking forward to travelling together with Joaquim. Most Mozambicans live outside the capital, and I was eager to see how they live.
The meeting point was the Zimpeto National Stadium in Maputo and from there we took the N1 national road to Vilankulo. Vilankulo is located on the Indian coast about 714 km from Maputo. The coastal town has about 40,048 inhabitants and has become a popular destination for tourists.

After about three hours we made our first stop in Bilene. There, we visited the secondary school, which was opened in November 2021 by the DMG in honour of the late Honorary Consul General of the Republic of Mozambique, Siegfried Lingel.
Before this secondary school was built, there were no secondary schools in the region around Bilene. Instead, after primary school, young people had to travel long distances to attend secondary school in neighbouring communities. For most of them, however, it was not possible due to the distance, as the public transport network is not sufficiently developed. Young girls in particular learn from an early age that household duties are more important for women than school education. This deprives them of the prospect of leading a financially independent life. Often, they have no choice but to marry in their teens and start a family.
It is mainly through such fates that I became even more aware of the importance of educational projects and the great impact they have on the lives of young women.
The DMG is planning to expand the school in the future and build a training centre on the same property. When we visited the school, some students and teachers were cleaning the plot where a vegetable garden will be planted. This reminded me of my primary school in Maputo, where we also had a vegetable garden that we took turns looking after.

Mozambicans Are on Average 17 Years Old

By travelling by car, I got to know Mozambique in a completely different way. What struck me most was how many young people live in Mozambique. 45% of the population of Mozambique is younger than 15 years (Mozambique CIA Factbook), the average age is 17 years (as of 15 June 2022; Mozambique Population 2022). This is immediately striking the eye, especially in comparison to Germany, where the average age is 48.

What Does This Mean for the Country?

Despite the economic development of recent years, Mozambique is considered one of the poorest countries in the world. After the long colonial period, the country has been able to invest little to hardly any financial resources in the country’s education system. As a result, there are not enough educational institutions nationwide for the rapidly growing population. Much is already being done to improve education, such as the construction of new primary schools, and vocational training centres, or through awareness-raising work. Across the country, this has already seen an improvement in the number of children enrolled in school. In 2017, 85% of children were enrolled in school, compared to only 55% in 2000 (Improving primary and vocational education in Mozambique | BMZ).

Growing Gap Between Rich and Poor

Along the road, we saw a striking number of women and young girls selling fruit, vegetables, homemade pastries, or handicrafts by the roadside. It is still the case that children, even small children and especially girls, have to support their families to earn a living.
Seeing this, I asked myself again what the reasons are that they are not in school. Can they not afford it? Do their families not think it is necessary? Did they not get a school place?
The economic development in the country is also very different. The gap between wealth and poverty is widening, which is incomprehensible to me. A large part of the population has to get by on less than 2 US dollars a day, while others wallow in luxury.
In addition, children outside the big cities still have to walk long distances alone to attend school. We constantly saw children and young people on their way to school or home. So much can happen to children in Mozambique on this kilometre-long walk without a pavement along the road, but for them, it is absolute normality.
In the capital Maputo, things are very different again. Many children are taken to school and home by school buses or drivers of their families. They do not know what it means to walk for hours to attend classes. I can hardly believe that within one country the differences in living standards are so big. The car ride was a stark reminder of this reality.

In the rural areas, I also noticed that many non-profit organisations from abroad are present. They support the poorer population and thus make an important contribution to the development of these regions. For example, many pre-schools and primary schools are being built to provide education for children outside the city. Especially when you look at the literacy rate among young people aged 15 to 24, you realise the need for schools. In 2018, the literacy rate for women was around 57%, while the rate for men was around 80% (Country Strategy Mozambique).
It also reassured me that the work of the FHF is very important. Because education should not stop after primary school. For the future of Mozambique to improve in the long term, the population must be able to learn a trade and provide for themselves.

When we arrived at the hotel in Vilankulo very late in the evening, I was mainly looking forward to a shower and bed. Fortunately, we had called the hotel in advance to have some sandwiches put in our room, as the hotel’s restaurant was already closed. After dinner I went straight to bed, the journey and the many impressions had exhausted me. The next morning, I had my first appointment with the Vilankulo city council at 9 a.m. You can read about how the appointment went in the third part of my travelogue.